Tbilisi – An eight member CACCI delegation visited Tbilisi, Georgia on May 23-24, 2016 to gather first-hand information on the current economic and business conditions in Georgia and explore possible areas for foreign trade and investments in the country. The delegation was welcomed by CACCI President Mr. Jemal Inaishvili, who is from Georgia, as well as the other officers and members of the Georgian Chamber of Commerce and Industry (GCCI) led by GCCI President Mrs. Nino Chikovani. […] 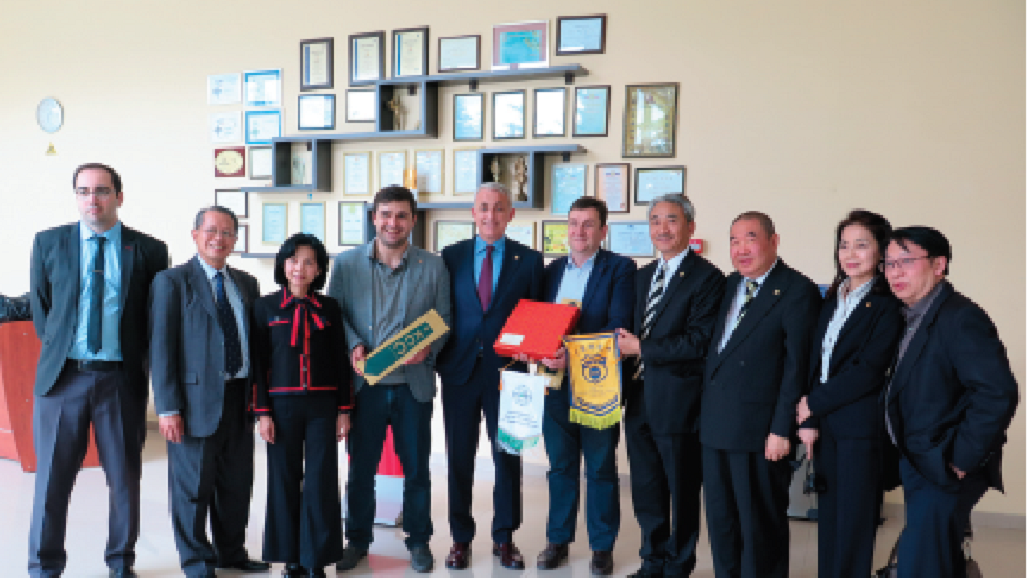 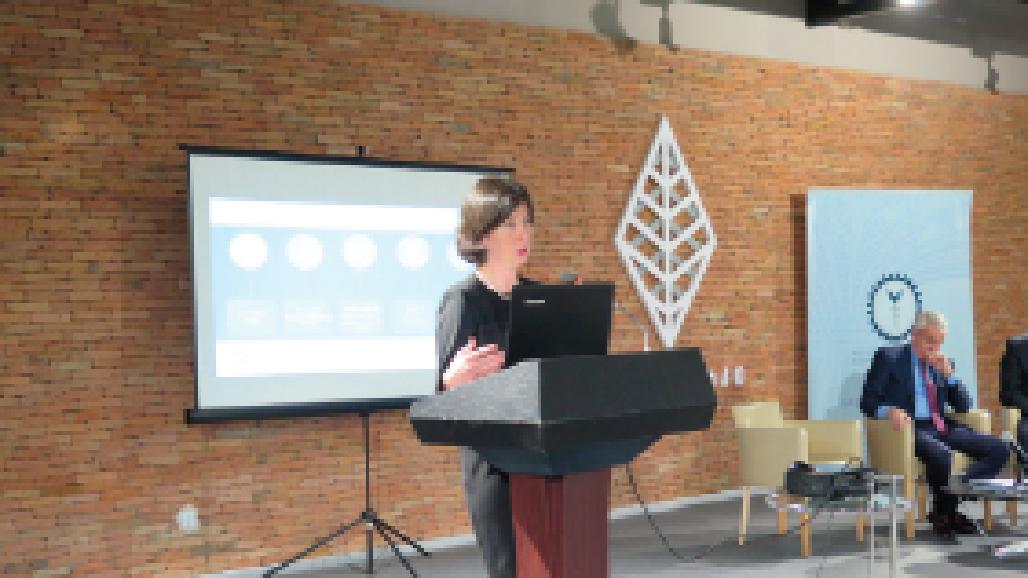 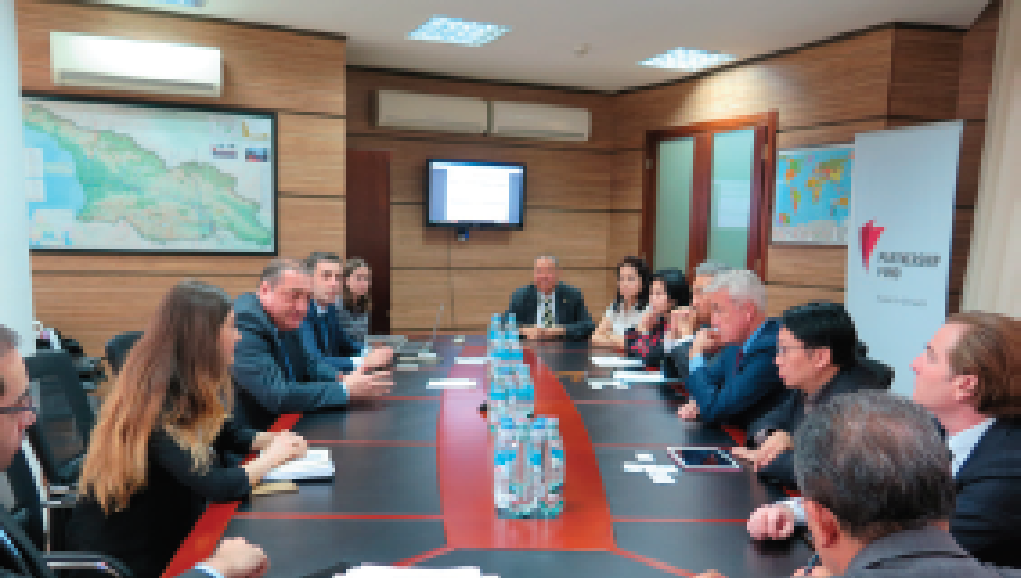 Tbilisi – An eight member CACCI delegation visited Tbilisi, Georgia on May 23-24, 2016 to gather first-hand information on the current economic and business conditions in Georgia and explore possible areas for foreign trade and investments in the country. The delegation was welcomed by CACCI President Mr. Jemal Inaishvili, who is from Georgia, as well as the other officers and members of the Georgian Chamber of Commerce and Industry (GCCI) led by GCCI President Mrs. Nino Chikovani.

The two-day program allowed the CACCI delegation to meet with various government officials and exchange views on trade and investment issues as well as identify areas where Georgia and CACCI member countries may strengthen their economic relations. The delegation also had the opportunity to network with GCCI officers, members and other local businessmen; visit three local companies representing various industry sectors; and experience some of the tourist attractions and places of interest in Georgia.

Highlights of the delegation’s visit include the following: Business Forum The delegates attended a Business Forum organized by GCCI to discuss investment opportunities in Georgia and possible areas of business cooperation. Held at the premises of the recently opened Tech Park Georgia. The Forum was opened by GCCI President Mrs. Nino Chikovani. In her Welcome Remarks, Mrs. Chikovani expressed her hopes that the CACCI visit would generate long-term business relationships between Georgia and CACCI member countries and that GCCI and CACCI would continue to work together for mutual development.

She invited CACCI members to invest in Georgia in diverse areas. In his Remarks, CACCI President Mr. Inaishvili said that Georgia is a country that offers plenty of opportunities for foreign investors and businessmen, given its growing market-based economy. He encouraged CACCI members to take advantage of the country’s economic strengths and potentials. The other speakers at the Forum included: Ms. Ketevan Gogitidze, Chief Specialist, Service Department at the Georgian Chamber of Commerce and Industry (GCCI), who gave a brief introduction on the GCCI and its various activities.

Created in 1960, the GCCI unites six regional chambers, up to a thousand of associations, companies, and banks, among others. GCCI takes part in the development of economic drafts, legislative and other acts. It leads systematic negotiations with its members, elaborates common opinion of business society, and submits it to the management of the country, its ministries and organizations. Implementing its infrastructural function the Chamber renders active service to business.

GCCI is also a member of the International Chamber of Commerce (ICC) and it follows as well as participates in the economic processes taking place in the country. Mr. Alexander Papaishvili from the Georgian National Investment Agency (GNIA). The GNIA is a sole public agency responsible for promoting and facilitating foreign direct investment in Georgia. It plays a moderator’s role between investors, government and local companies. GNIA serves as “one-stopshop” for investors. This includes providing general data, statistics, sector researches; organization of site visits & accompanying investors; access to Government at all levels/local partners; legal advising & supporting services. Mr. Elizbar Lominadze, Project Manager of the Georgia Industrial Development Group (GIDG). GIDG is the agency under the Ministry of Economy that is responsible for facilitating the development of the private sector in industrial manufacturing and agri processing.

Georgia is encouraging new businesses to help grow the economy through implementing industrial projects and diversifying economic activities. In one year, the GIDG created 16 investment projects worth about $80 million USD (190 million GEL) to present to interested investors. Mr. David Shiolashvili, Head of Research, Analysis and Monitoring Department at Enterprise Georgia. The Entrepreneurship Development Agency (Enterprise Georgia) was established in March 2014 under the Ministry of Economy and Sustainable Development of Georgia.

Enterprise Georgia is the first government institution in Georgia mandated to facilitate private sector (and in particular SME) development through a variety of financial and technical support mechanisms, as well as export support. At the same time the Agency is an integral part of the new State Program “Produce in Georgia”, initiated by the Prime Minister Irakli Gharibashvili to encourage domestic production and increase productivity and competitiveness of SMEs. Mr. Homer Yu, Secretary of Business Department at Kowloon Chamber of Commerce and concurrently Vice Chairman, China Council for the Promotion of International Trade Guangzhou Huangpu District Branch. Mr. Yu made a presentation on the proposal for the One-Belt, One-Road Eurasian Business Center to be established in Huangpu District, Guangzhou, China.

The Center will be part of the Euro Asia Trade, Culture and Exhibition Center (EATC) that the Government of Guangzhou HuangPu will establish for international organizations to work together in a functional environment, providing exhibition spaces for trade delegates to show their products for China and overseas visitors. Mr. Amador Honrado, Deputy Director General of CACCI, who gave a brief introduction on CACCI and its activities, particularly those that are aimed at providing a platform for networking among businessmen in the region and promoting regional cooperation.

Mr. Honrado also invited the meeting participants to the upcoming 30th CACCI Conference to be held in Taipei, Taiwan on November 23 – 25, 2016, which also marks the 50th Anniversary of CACCI. Tour of Georgia Tech Park Following the Business Forum, the CACCI delegation was given a tour of the Georgia Tech Park. The visitors learned that Georgia’s first tech park was built by the Innovations and Technologies agency, LEPL. It creates a united ecosystem for innovations and technology, and promotes development of innovative ideas. It is aimed at developing small and average-sized enterprises.

Meeting with the Partnership Fund

The delegation proceeded to Partnership Fund where they were received by its key officers led by Chairman Mr. David Saganelidze. Partnership Fund (PF) is a state owned investment fund, established in 2011. PF’s main objective is to promote investment in Georgia by providing co-financing in projects at their initial stage of development. PF has a mandate to invest only in Georgia. PF’s strategy is aimed at attracting and supporting private investors.

The CACCI delegates visited Zedazeni, a leading beer and beverage company in Georgia located some 20 kilometers west of the capital city of Tbilisi. The company started construction of the production facilities in May 2011. It is equipped with most up-to-date equipment from the best European producers. The team has more than 20 years of experience working in the production and marketing of beer and beverages in Georgia.

The delegation was accompanied by CACCI President Mr. Jemal Inaishvili to visit some of the country’s tourist attractions located just outside of Tbilisi. The group visited Kakheti, which is Georgia’s premier wine producing area. It is known to be a land of hospitable, openhearted and straightforward people who live surrounded by rugged mountains, ancient castles, magnificent churches. Sighnaghi is a town in Georgia’s easternmost region of Kakheti. It is one of the country’s smallest towns with a population of about 3,000. Its economy is dominated by production of wine and traditional carpets and is considered an important center of Georgia’s tourist industry.

The visit ended with a dinner hosted by GCCI, with cultural performance. It served as another occasion for further networking as well as for thanking the host chamber (led by Mrs. Nino Chikovani) and CACCI President Mr. Jemal Inaishvili for the excellent arrangements made for the visit and for their very warm hospitality.