The Confederation of Asia-Pacific Chambers of Commerce and Industry (CACCI) is a regional non-governmental association principally composed of the national chambers or associations of commerce and industry in Asia and the Western Pacific.

CACCI’s current membership from 25 countries and independent economies have a total population of 2.96 billion people, generating a combined GDP of US$18.79 trillion, growing at 4.9%, exporting US$5.48 trillion and importing US$5.29 trillion of goods and services in 2021.

CACCI’s objective is to cut across national boundaries to link Asian businessmen to promote economic growth throughout the Asia-Pacific region. CACCI is a non-governmental organization granted consultative status under the United Nations.

On February 15-20, 1965, representatives of chambers of commerce and other trade organisations from various countries in Asia gathered in Manila for an Asian Conference of Chambers of Commerce under the theme ‘Asian Progress Through Economic Co-operation.’ 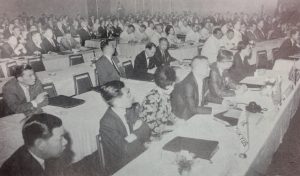 The conference was significant to Asian businessmen and to the region’s population, not only for the study it made on vital and current economic problems of Asia, but also because it ushered in the unification of chambers of commerce in the region. It was the first step towards a potent regional economic cooperation. A resolution creating a Select Committee was approved during the conference to prepare the preliminary work in formalising the organisation.

In September 1965, just a few months after holding the conference, the Select Committee met in Hong Kong to discuss the establishment of the Confederation of Asian Chambers of Commerce and Industry. Less than a year later – on May 2-6, 1966 – CACCI held its inaugural conference in Taipei with 10 national chambers represented. The first officers were elected and the First Council Meeting was held. Since then, CACCI has been holding regular biennial conferences with concurrent themes and annual council meetings.