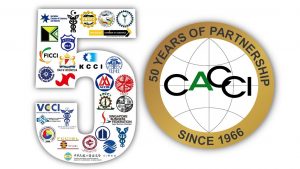 CACCI’s mission is to provide a platform for promoting the vital role of the businessmen in the region, increasing regional business interaction, and enhancing regional economic growth.

The governing body at CACCI is a Council composed of the presidents or representatives of each Primary Member. The Council meets at least once a year and administers the affairs of the confederation, pursues its objectives, implements its policies, and promulgates rules and regulations in accordance with the CACCI Constitution.

It elects from among its representatives the following officers of the confederation, each for a term of two years or until their successors have been elected: 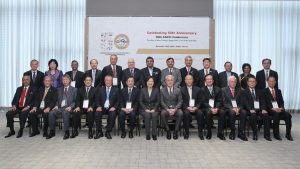 CACCI leadership during the 50 years anniversary in Taipei

The President serves as the chief executive and presiding officer of CACCI. He appoints, with the approval of the Council, a Director General and a Deputy Director General. The Director General, assisted by his Deputy, forms a staff for the operation of the CACCI Secretariat.

There is an Advisory Board whose members include the past presidents of CACCI. It suggests measures for the improvement of the association and its structure; offers solutions to problems whenever they arise; and gives advice on matters where such is sought by the officers of the Confederation. 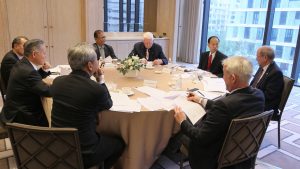 There is a Budget Commission which prepares and presents the Annual Budget of the Confederation, reviews the income and expenditures, and formulates ways and means of providing the financial requirements of CACCI.